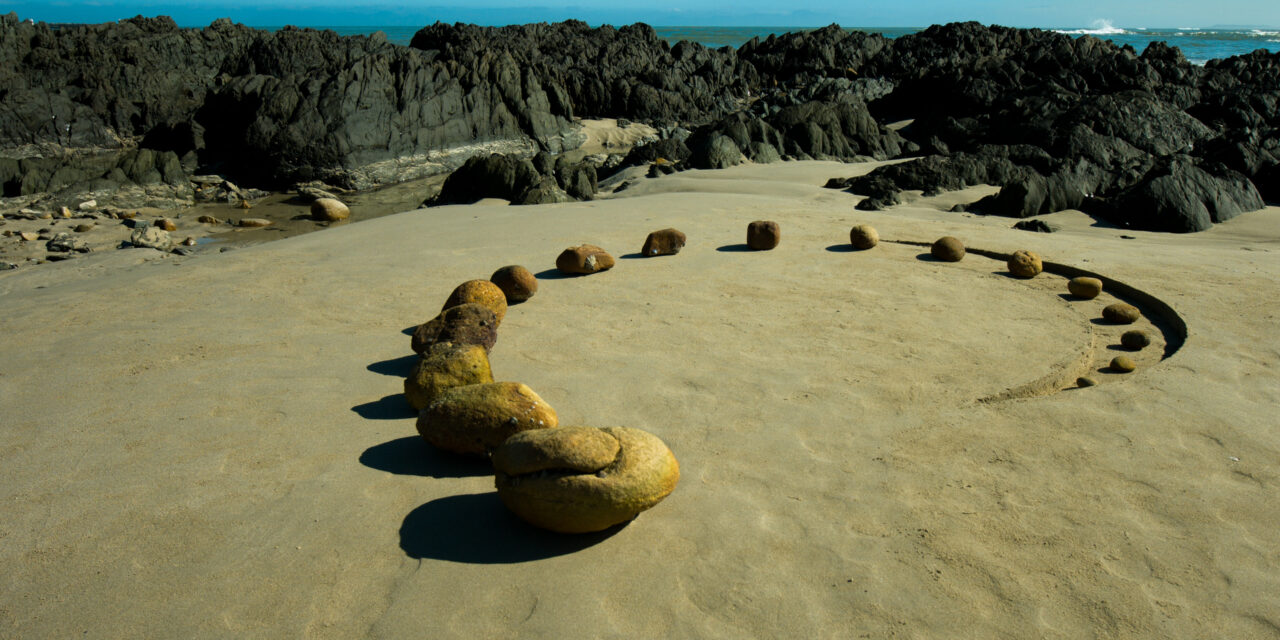 Locally produced documentary feature film Sculpting This Earth is to have its world premiere screening on Friday 26 August 2022, the opening day of Riebeek-Kasteel’s art-focused Solo Studios weekend. Heading a stellar line-up of exhibitions, talks, presentations and walkabouts to studios and galleries running from the Friday to the Sunday, the recently completed film will have its first public screening at 10.30 am at the new state-of-the-art Kelderteater downstairs at Die Kunshuis, Main Street, Riebeek-Kasteel.

The 95-minute film shows internationally acclaimed Stellenbosch-based artist Strijdom van der Merwe at work in the landscape, making artworks using mostly natural materials found on the site, in a range of beautiful natural settings over the course of a year.

Sculpting This Earth, produced by Cape Town-based CineSouth Studios, is the first feature documentary globally about land art from the southern hemisphere. Land art has been around since the 1960s. Pioneered mainly in north America and Britain, it is today practised around the world. Mostly fragile and ephemeral, far removed from population centres and the commercial art market, these are works of art that rely on photography or cinematography to connect with an audience.

Sculpting This Earth shows Strijdom at work over four consecutive seasons, making land art works in remote and unspoilt settings in the vast open spaces of the southern African interior, using sticks, stones, leaves, rocks, grass, feathers, bamboo, water, and at times nothing more than the soil, sand and small stones on the ground – the earth itself.

Principal photography on the film started in the southern-hemisphere midsummer on 15 December 2020, in the Jonkershoek valley outside the university town of Stellenbosch in South Africa’s Cape winelands, and continued throughout all four seasons in the greater Stellenbosch area, with its fertile valleys and verdant forests, and including the surrounding Boland and the beaches of nearby Gordon’s Bay.

Interspersed with the sequences shot in the Stellenbosch area, the film follows the artist as he travels to make artworks in increasingly distant locations in southern Africa: initially in the idyllic setting of Churchhaven on the pristine and peaceful Langebaan lagoon in the West Coast National Park, then further afield, and in stark contrast, in the harsh, unforgiving landscape of the semi-arid Tankwa Karoo.

Strijdom van der Merwe is prolific internationally, having made land art works on invitation in more than twenty countries, as diverse and far apart as Australia, Japan, Lithuania, Switzerland, Finland, Malta, Kenya, Denmark, the Netherlands and the United States. The title of the film references two books of images of his works, Sculpting the Land (published 2005) and Sculpting the Earth (2011). An aspect of the meaning of “this earth” in the film title is this southern African earth, as Strijdom makes land art internationally but the film shows him at work in the part of the world where he lives, where he is rooted, and to which he has particular personal, emotional and artistic connections.

Sculpting This Earth features a powerful soundtrack that includes 11 tracks of original music composed for the film by accomplished classically-trained composer Kristi Boonzaaier of PolyForge Media.

The project was supported by Monaco-based art collector Mike Spittal whose South African art collection is on display at his striking new home and exhibition space Die Kunshuis where the screenings will take place.

The end August screenings are an opportunity to see the film before it sets off on its journey to film festivals around the world.