Reflection and Reflex – finding our way back to humanity! 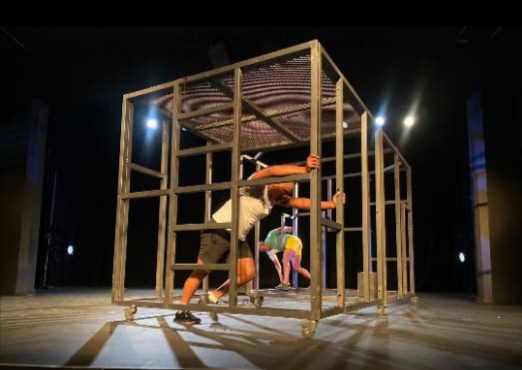 Broken Borders Arts Project in association with the Market Theatre presents Reflection and Reflex a contemporary dance piece for 6 days ONLY from Tuesday 17 – Sunday 22 May 2022.

A trio of bodies and steel intertwine to reveal images, movements of connection and isolation. Two men dance in poetic relationship to a sculpture of steel, evolving in multiple forms. This play of contrasts between light and shadow, inner and exterior worlds, is Reflection and Reflex – a magical but deeply painful new work from Thulani Chauke and Fana Tshabalala.

After two years of regulations and isolation, the internationally renowned dancers first staged this work of embodied lyricism at the Con Cowan Theatre in 2021. Gerard Bester, who has recently joined the Market Theatre family, has been invited to cast an eye and distil the work for the John Kani stage.

Since its inception, Broken Borders Arts Project has been committed to creating South African Dance theatre that critically interrogates personal and social issues. It has consistently collaborated with local and international performers, choreographers, and theatre practitioners to present quality theatre works and residencies at both a national and international level.

Reflection and Reflex was masterfully created and choreographed by award winning dance duo in Fana Tshabalala and Thulani Chauke. Telling a story through dance and evoking audiences emotions is right up their alley.

Fana Tshabalala is the 2013 Standard Bank Young Artist Award Winner for Dance and former Associate Artistic of the Forgotten Angle Theatre Collaborative, 2018 Black Excellence Award recipient in Chicago. Fana started his career within the performing Borders Arts Project as a dancer, teacher, choreographer, artistic director, and one of the founders.

Thulani Chauke began his formal training in 2009 at Moving into Dance Mophatong (MIDM) as part of the Performing Arts Training Course (PATC), and little did he know that he will be selected to be a trainee and later that year he joined the MIDM Professional Dance Company. This all happened after years of performing and training with community groups in Soweto. Thulani has recently been seen performing in the internationally acclaimed production, Sybil, by William Kentridge.