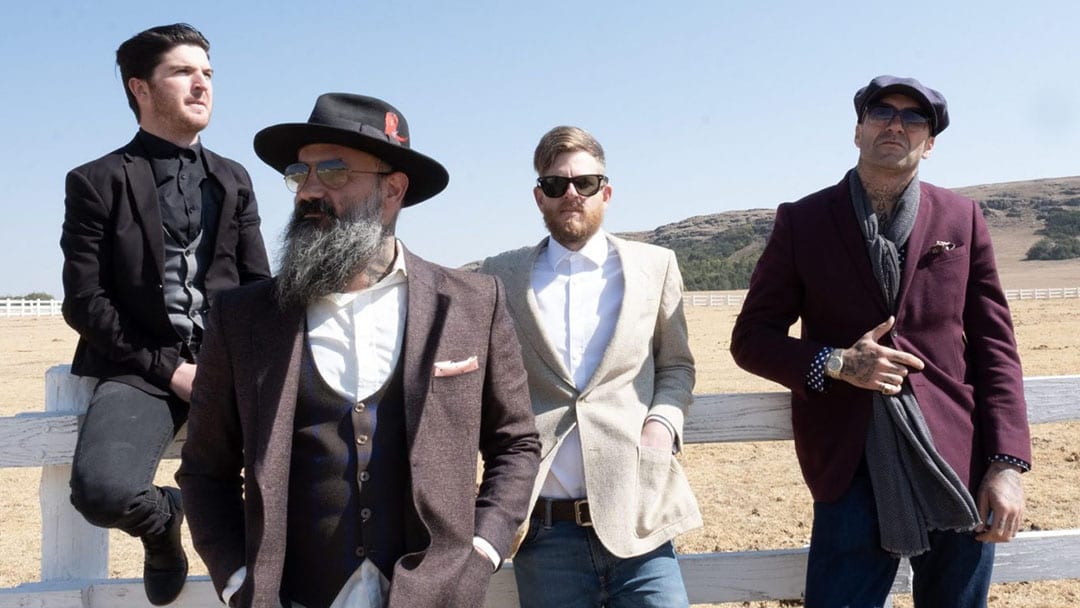 Gunshot Blue formed in 2014 by frontman Frans Borman and guitarist Pepi Dimevski, and released their debut EP “12 396km” in November 2014. Four years later, the band are excited to announce the release of their first full-length debut album “Until The Last Prayer” – due for release on the 31st of January 2019.

It is quite a stretch from the release of your last EP to this new album, why has it taken so long to record and release this new music?
Frans:
“The album has been ready for a while. We decided to release it at the

beginning of 2019, so that it could fall within the new year and it is in time to enter it for this year’s SAMAs. The real reason it took so long is not a reflection of our creativity, our productivity or ambition, it is just because it is difficult to align schedules, etc. Sometimes it is a good thing to allow things to marinade over time, because it could just get better, hopefully. It was just circumstances, that’s all.”

You guys have being playing live for so long and over the years you’ve honed a sound and have created an image of who Gunshot Blue is. How did you decide what your sound and image would be on this album?
Frans:
“I’m not a business man or a strategist. I would like to say that there was a plan, but what you hear, is just how the music grew. Sometimes things grow in different directions but then it falls back into place. The EP is like the landscape of the North West or Limpopo, being a bit rough, the landscape is not that green, but the sunsets and sunrises are beautiful. I feel the full length album is a bit more dimensional, more polished, more mystical, more refined. There are so many factors that contribute. You get to know the guys you play with better. It’s the second time we’ve recorded with Tom Hughes, so also he knows us better. It’s also a question of trust, where you feel more comfortable and so can experiment more. If the EP was an Audi Q3, this one is an Audi Q5. The EP was the trailer, this is the movie.”

How do you translate the live act into a studio album?
Frans:
“We’ve got the blues, the resonator set and the electric set which is a little more rock and roll and louder, so we are in a transitional phase where one or two

of the songs on this album have more of an electric feel. Like ‘Neon Love’ has more of a live electric sound now. We didn’t set out to capture the live sound when recording, we just want good quality. It must just fit. When I listen to an album it is more of an introspective thing, a reflective thing. An opportunity to get into the bands mind or heart, their inner world. Live is more about having fun, letting go, and is where you experience the energy and expression of the band. The essence or spirit of the song will be there but it’s not in your face. It’s like an audio polaroid of the band.”

Which is your favourite song?
Frans:
“There are a couple. I would say my one favourite is ‘The Cave’. The way it was written was strange. I was inspired when still staying in Observatory, next to Yeoville. Things happen when you stay in a certain area. Some dark things happened to me during that time. One weekend I went to Swaziland and it was beautiful almost spiritual, the total opposite of living in Yeoville. The words came to me in Swaziland and then after that this weird dark period happened in Yeoville. It was like two worlds meeting.”

‘She’ – I wanted to write a song for my sister. She was going through a challenging time and she has struggled with her health, so I wanted to write something to encourage her and send good vibes to her. Then the song went into a different direction; the second verse became about a guy working hard. Then the song became about a love story as the third verse is about a couple staying together despite everyone judging them. So it is strange how when you create something, you have your idea, and then it gets a life of its own. ‘She’ is also about how we hurt the world. There are so many meanings.”

If someone had to ask you to play one song of yours, to really understand who Gunshot Blue is, which song would it be and why?
Frans:
“‘Woods’ it’s a slow paced song but its energy is intense and Woods has a great resonator; it is dark, ominous and voodoo like; it is still like a dance of darkness and light. That would make one curious to hear more.”

Is there a moment is your music career that has stood out for you?
Frans:
“When we tour the Cape, we always try to drive there so that on the way we can play one or two shows in small towns, where we never get to go to. I have always loved the Karoo. So in the small towns, you play to stay, because there are so few people. One Sunday evening, there’s a guy who owns the bookshop in Richmond, and so we played in one of his rooms, in an old house, with candles and wooden floors, it felt like we were playing in a museum. We only played for about 4 people, but that for me felt like we were in church at someone’s house. It was so basic and raw, but that for me was so special, because we never get to play shows like that. There were four different people of different ages.”

“Another moment in Mozambique at FORR Fest, it was loose and raw and I started taking my clothes off and two women came and put money in my pants. It was fun and really rock and roll.”

“In Hermanus at the Gecko bar we had a bus of tourists about 60 or 70 years old arrive. We thought they’d be a tough crowd, but they got up and started dancing, which was so great. Be careful who you judge.”

Trapped on a desert island and you could only take one album with you, what would it be and why?
Frans:
“I’m a big Van Morrison fan – The Best of Van Morrison Vol 2 would be it. Somehow I feel safe when I listen to it, I never get tired of it.”