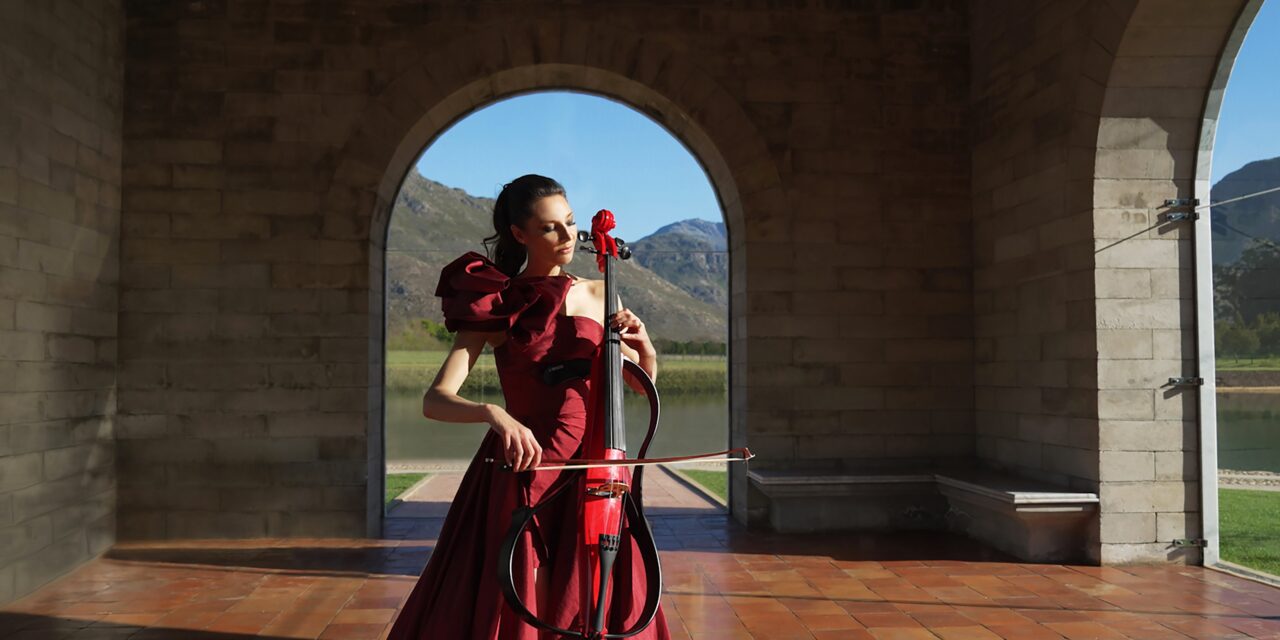 Carol Thorns has an engaging performance style and her innovative musical concepts have seen her opening for Vanessa Mae and Elton John. A sought after performer, she has played at prestigious events throughout SA, Europe and the UAE. Her portfolio of original cello projects, Red Cello Productions, include show-stopper acts such as The Bubble, Rosanthorn Trio, CODA Africa and The Galaxy Dress.

On her solo album, Sanctuary, her sumptuous cello gives listeners an opportunity to connect to a more soulful world as it glides over layers strings, orchestra and piano. This is music for mindfulness, stillness and sanctuary. The album was launched in December and is available on all streaming platforms. Carol’s album launch event is taking place on the 18th January 2023 at 7 PM at The Sanctuary, La Roche in Franschhoek. Contact Carol on carol@redcello.co.za or buy tickets directly from Quicket (R250 pp).

The album is a well-considered collection of covers and original works inspired by the minimalism of Philip Glass and film music of Max Richter. Popular songs such as Quietly Yours (Birdy), Ocean Eyes (Billie Eilish) and Shallow (Lady Gaga) are given brand new treatment that delivers serious emotional punch. The cello soars over poignant harmonies of layered strings, piano and orchestra.   It is goosebump-inducing stuff.

The background story is this. During COVID the music industry came to a complete standstill. Carol felt compelled to keep up with her performing. She performed 3 ‘COVID’ concerts on the island at Patrysfontein Dam for the community, drawing a crowd of up to 250 people a time.  Carol also performed a Lockdown Series of ten performances weekly outside her home in Franschhoek.

“I did this as much for myself as for the community. Music was my sanctuary over this time. We learnt again what is important in life and I wanted to capture the music and memories of this period with a new release“, says Thorns.

The album is recorded and produced by composer Helmut Meijer. Carol’s debut album ‘Fireflies in The Rain’ created with Meijer in 2010 was nominated for the Best Instrumental Album at the South African Music Awards. An interesting backstory is that 2 of the pieced (‘Butterflying’ and ‘Dawn) were performed  by Helmut’s mother, Rina Smith, who is in her Eighties.

This was a project that is fully home-grow. The recordings were done partly at The Sanctuary at La Roche (until the Egyptian Geese flying past interrupted the recordings!). Carol’s video of the first single off her album, Quietly Yours, was created by The Jupiter Studio Franschhoek. “I’m immensely proud of this video”, says Thorns. “I worked with the very best in the industry – and all based right here”.  The video produced by Luke Osche and directed by Jade Mulvaney.

Watch the video by Carol Thorns for ‘Quietly Yours’ –