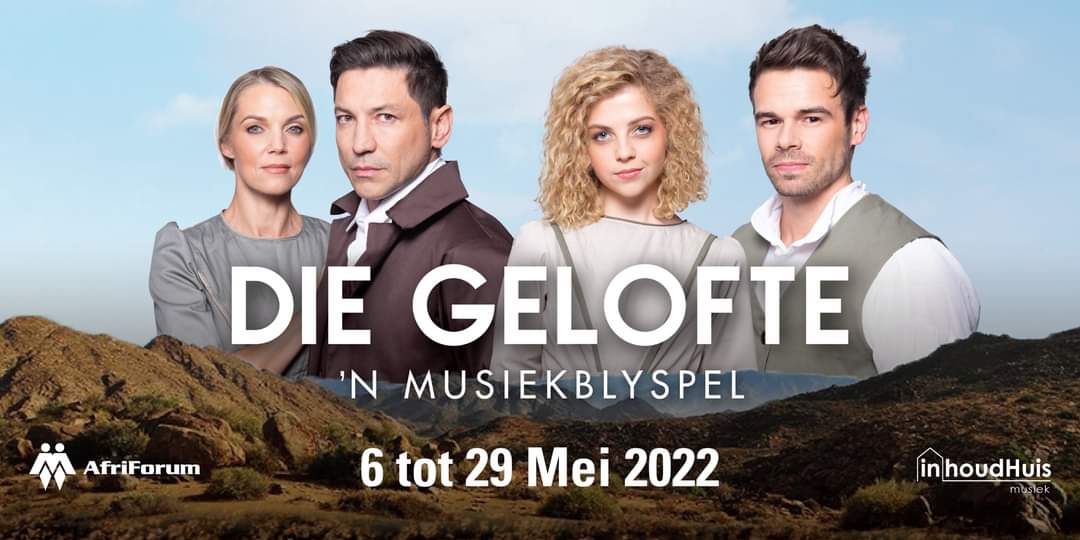 DIE GELOFTE: ’N MUSIEKBLYSPEL with music and lyrics by Johan Vorster and Jacomien de Wet, follows the events leading up to the day of the covenant (vow) during the Battle of Blood River. Tickets are now available at R350 per person at https://linktr.ee/dieGelofte.

When Aimee and Ali, two high school drama students, discover letters in the basement of the theatre, the story of Sarel Cilliers and the Voortrekkers’ journey across the Drakensberg to the promised land unfolds; a love story between two young people who seem to have an impossible happy ending.

“History cannot be rewritten, but it can be approached from a different perspective. When you see the musical, you will understand why it was important to us to tell this story. Parallels are drawn that are still relevant today. Land, family ties and the gruesome reality of life,” says Erasmus.

Vorster and De Wet add: “We believe that it will touch the lives of every person who watches it. There was hope for us in 1838 and there is still hope for us today.”

Johan, a renowned songwriter and producer (De la Rey, Pa en Seun, Eendag as ons Groot is, Swart Koffie, Skepe, Nonna, Net voor die Storm kom, and many more), is returning to the stage after he decade of working behind the scenes and used to be part of the SAMA award-winning group, Eden (Is jy Bang, 54 5de straat, Lyf teen Lyf and Kwart oor 5).

More exciting news is that Bernice West’s second single, Soen My Op My Mond (ft. Ilán van Staden), from her upcoming album, JONA, that will be released later this year, was released on all digital platforms on 6 May.

This hit also forms part of the DIE GELOFTE: ’N MUSIEKBLYSPEL soundtrack that is now available for digital download – Get it here: https://DieGelofte.lnk.to/MusiekBlyspel

AfriForum Theatre celebrated its first birthday in March and this production promises to set the standard for the coming year.

DIE GELOFTE: ’N MUSIEKBLYSPEL is a family-oriented wartime love story about an outsider who had no chance of achieving victory on his own. It promises to take you on an emotional rollercoaster and will stay with you long after the final curtain call.

Definitely not something to be missed.
Book your seats here now: https://linktr.ee/dieGelofte.