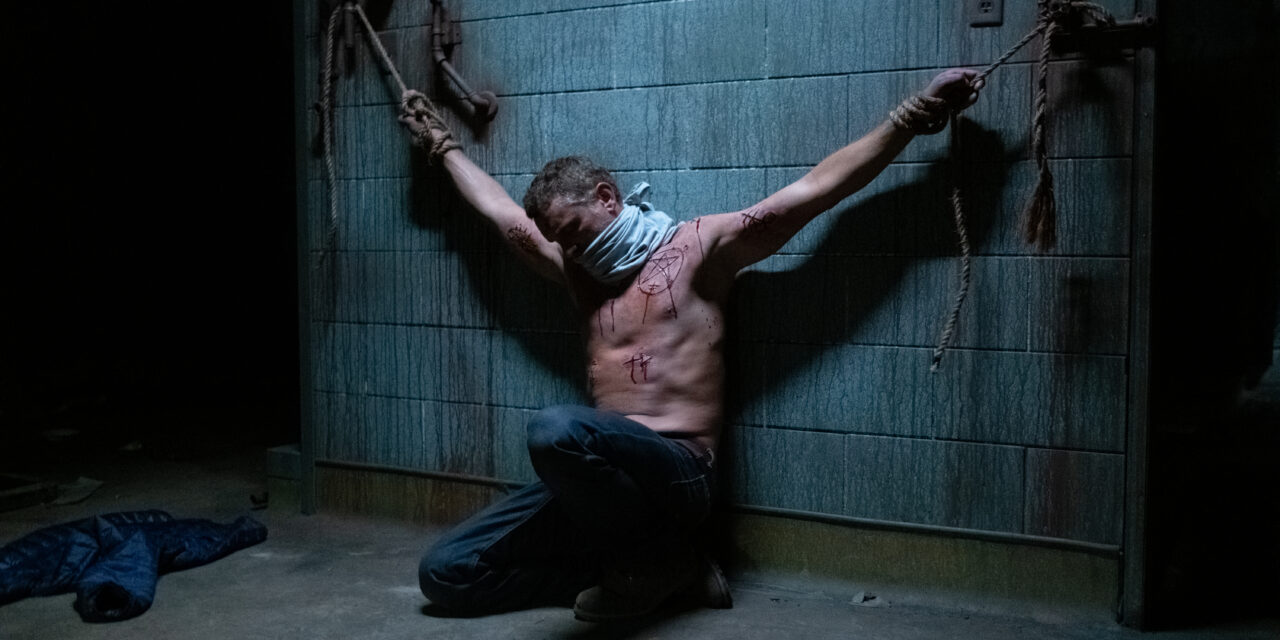 According to Blomkamp, the idea for the film was influenced by a combination of things. “When the pandemic occurred and my other projects were put on hold, I wanted to do something we could control and just go out and shoot, so I decided to do something in the horror realm. I also had this idea of using a new technology called volumetric capture, which lends itself more to science fiction. So, it became a case of how to create a story with those elements.”

DEMONIC unpicks the troubled relationship between a daughter and her convict mother, after a medical tech firm instigates an unusual reunion.

When Carly (Carly Pope) learns that her estranged mother Angela (Nathalie Boltt), a convicted mass murderer, has fallen into a coma, she reluctantly agrees to take part in a cutting-edge therapy that will allow her to tap into her mother’s still-active brain and communicate with her. Of course, this journey is preceded by warnings as to what might happen if memories slip out of sync.

Haunted by terrifying visions in the real world, Carly joins forces with an old friend (Chris William Martin) as she desperately tries to fend off the demon before it can enter a new host. Carly’s character is easy to identify with as she struggles to process long-suppressed memories, while Martin is solid in his supporting role. They are joined by Kandyse McClure, who adds a little fun to the trio.

Although there are some genre cliches, such as power outages and an abandoned hospital, DEMONIC is visually inventive and the virtual reality scenes have a distinctive, hyperreal look. The simulation that Carly walks through inside Angela’s mind is particularly engaging and makes for some interesting dreamworld exploration.

“I wasn’t trying to make something overtly science fiction, I was just following ideas that interest me,” explains Blomkamp. “The concept of the brain as a computational device for external senses, and the idea that those inputs can come from your body but could also be connected to other sources, was something I found fascinating.

“We used a new technology called volumetric capture, which I don’t believe has been used in a film to this extent before. It’s basically three-dimensional video, where you’re turning your actors into geometry. You need about 260 cameras arranged in some sort of grid or dome that can see the actors from all points of view.”

Another intriguing and weirdly logical 21st century twist is Blomkamp’s take on the Vatican, who uses virtual reality technology to seek out the demonically possessed.

Blomkamp worked closely with Director of Photography Byron Kopman to achieve the desired look of the film. “I hate how in a lot of horror films the dark environments feel overly lit and synthetic. So, the main discussion was about how much light we could work without for it to feel real. For instance, we have scenes that are illuminated only by car headlights or flashlights the actors are holding – none of this giant moonlight with smoke going through the air.”

As with any horror film, the score is also a major contributing factor. For DEMONIC, Blomkamp turned to composer Ola Strandh, who is best known for his acclaimed music for various video games.

“Music is a huge wealth of inspiration for me and whenever I come across new artists I really like, I make a note of them. I had heard Ola’s video game scores and thought they were amazing. It didn’t automatically make me think of a horror film, I just liked what he was doing with a lot of the electronic sounds. So, I contacted him to see if he was interested. It ended up being an awesome collaboration. I love the score.”

A horror with a high-tech twist, DEMONIC will have you on the edge of your seat from the start to the demon-filled finish.

It is locally distributed by Filmfinity Pty (Ltd.) and will be released in South African cinemas on 19 November 2021.