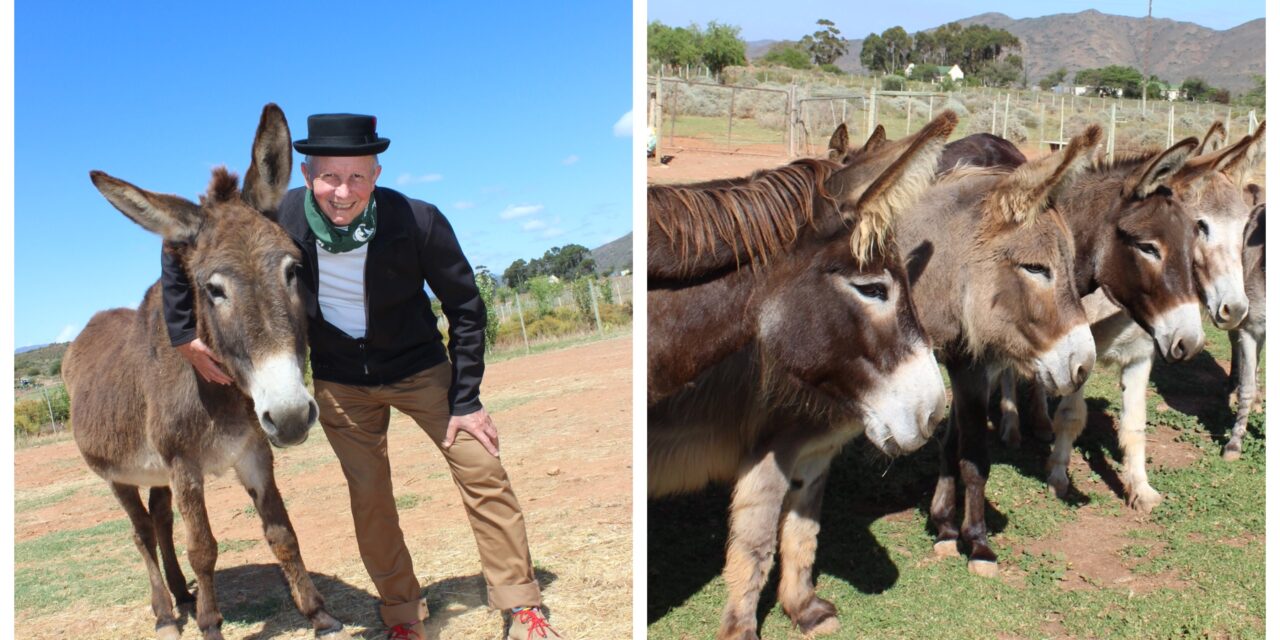 Donkeys may not be high on the priority list for many people – except for those who still depend on these hardworking animals for their daily existence. To this day, thousands of donkeys still transport goods, building materials, garbage, water and food for their owners.

Eseltjiesrus Donkey Sanctuary near McGregor was established 16 years ago when the need was realized firstly, for a safe refuge for abused, neglected donkeys and secondly, the need to raise awareness for these animals’ remarkable qualities, such as faithfulness and humility.

Shortly after the founding of Eseltjiesrus in 2008, music legend David Kramer agreed to be Patron of this special donkey haven. Dr Johan ban Zijl, chairman of the Eseltjiesrus Board, puts it this way: “ It was an honor to involve this celebrated and widely respected music and theatre personality from the inception of Eseltjiesrus.”

“I’ve always had a soft spot for donkeys,” says David Kramer. “As a child, I often saw them pulling carts, they were shouted at and beaten. They always seemed so tired and neglected. It felt unfair that they were so abused.”

Kramer composed and recorded the song “Donkiehemel” to create awareness of the plight of working donkeys as well as the welfare work that takes place at Eseltjiesrus near McGregor. He talks about the origin of the song: “ When I recently visited Eseltjiesrus, there was a proposal that I write a song for them. At first I could not imagine what I would sing about donkeys, but the next day, I saw the transformation in most of these animals. It occurred to me that Eseltjiesrus must look like heaven to an abused donkey. When I first had the idea, the song came pretty easily!”

“Donkiehemel” was launched on World Donkey Day on May 8th. “This striking song will definitely be used for a long time to create a greater awareness of the importance and needs of donkeys,” says Annemarie van Zijl, co-founder of Eseltjiesrus. This special donkey refuge is well known throughout South Africa, and is also part of a focused group of donkey welfare projects in 22 sub-Saharan countries. Annemarie van Zijl is also the editor of Donkeys for Africa, a magazine project that promotes communication on donkey matters across Africa. By sharing informationon projects and common challenges, donkeys across the continent`s needs are better understood. Happy donkeys can work better, and that means happy owners too, so everyone benefits.

Special event note: Book lovers can look forwards to the annual Eseltjiesrus Book Fair which will be held from 16 – 18 June this year that the Dutch Reformed Church Oos Kerk Hall in Robertson. Thousands of new and secondhand books in great condition will be on sale for the benefits of the donkeys at Eseltjiesrus. More info at: https://www.donkeysanctuary.co.za