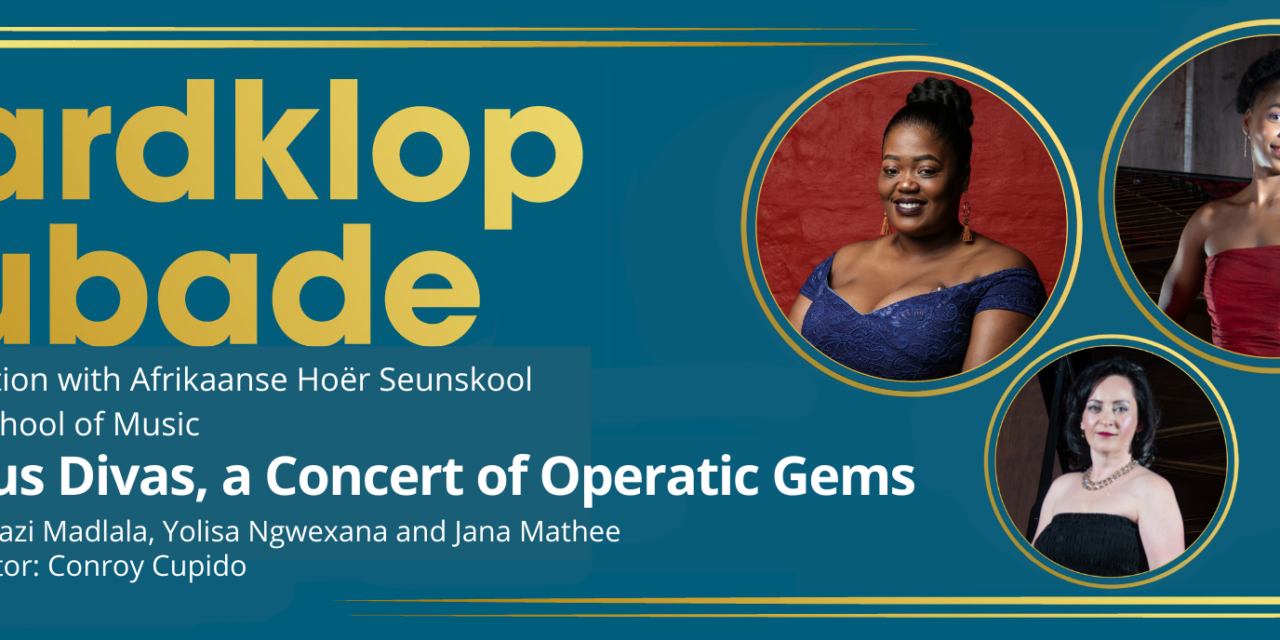 Aardklop Aubade in collaboration with Afrikaanse Hoër Seunskool and North West University (NWU) School of Music presents Delicious Diva’s, a Concert of Operatic Gems featuring two of South Africa’s up and coming soprano’s, Khayakhazi Madlala and Yolisa Ngwexana accompanied by sought-after pianist, Jana Mathee. The concert takes place on 7 November 2021 at 11am in the “Affies” school hall. Tickets cost R100 for learners, R170 for pensioners and R190 for adults are on sale now at www.ticketpros.co.za

Two-time Fiësta nominated Musical Director, Associate Professor Conroy Cupido originally from Cape Town but now living in the North West directs this feast of operatic masterpieces that will leave audiences wanting more. The medleys include well-known and loved arias by Puccini, Rossini, Bizet, Lehar and audiences will be delighted to hear some Afrikaans art songs including ”Oktobermaand” and ”My Siel is Siek van Heimwee”. TheDelicious Divas concert promises to be an unforgettable musical experience.

In support of Aardklop Aubade’s drive to continually develop and grow local talent, a 10-minute pre-show will showcase the Affies Guitar Quartet featuring Matric pupils Jan Wiese and Armandt Pelser with Jan-Adriaan Lourens (grade 11) and Hein Claassen (grade 10). These young musicians will play Habanera from Carmen Suite by George Bizet and Tango by Thierry Tisserand. The second number in the repertoire, entitled “Rondo in C major” is written by Affies learner Jan Wiese. A remarkable feat for this budding young composer.

Delicious Diva’s Musical Director, Prof Conroy Cupido was the first South African to earn the Doctor of Musical Arts Degree in Vocal Performance and Opera conferred on him by the University of North Texas, USA. Other degrees include Master-in-Music (MMus) and Artist Certificate from Southern Methodist University in Dallas, Texas and a Bachelor-in-Music (BMus) from the University of Stellenbosch. He is a Director on the board of Cape Town Opera and the chair of their Strategy Committee.

Prof Cupido’s first professional engagement was in a production of Who killed Jimmy Valentine? by Alan Stephenson, performed at the Baxter Theatre in Cape Town at the tender age of 15 and he has been active in the performing arts industry for almost 30 years. In 1999 he was selected to perform with internationally renowned South African soprano, Mimi Coertse, in her concert Debuut met Mimi at the State Theatre in Pretoria. Since then he has performed in opera, concerts, recitals and oratorios in South Africa, America, the United Kingdom and Italy.

He was the musical director for the very successful production Viva Italia, Opera Gala, which was presented at the Aardklop Arts Festival in 2012 with Richard Cock conducting the Johannesburg Festival Orchestra and North-West University singers. He was jointly nominated for two kykNET Fiësta awards in 2017 and 2018 respectively in Music Direction for productions mounted at the Aardklop National Arts Festival. His last production at Aardklop in 2019, ’n Non ‘n Prins en ‘n Spook stap in ‘n Kroeg! “(review of Broadway Musical Theatre hits accompanied by orchestra) was received with critical acclaim and rave reviews. Conroy is an Associate Professor of Singing and Opera at North-West University in Potchefstroom and his students have been finalists, been placed or won major national and international singing competitions. They also enjoy positions at opera companies in Europe, the United Kingdom and the United States. In 2013 he was awarded the Prestigious Award for Teaching Excellence from North-West University.

Soprano Yolisa Ngwexana, also born in Cape Town, will complete a Diploma in Music from North-West University this year under the tutelage of Prof. Conroy Cupido. While a student at NWU, Yolisa won several awards and worked with many international opera teachers, coaches, directors and conductors. In 2019 she won second place in the Mimi Coertse Scholarship Competition and in 2020 she was a category winner in The Voices of South Africa Opera Singing Competition. Yolisa recently performed with Johannesburg Opera in their Women’s Month concerts. In 2020 she made her debut as ”Lauretta” in Puccini’s Gianni Schicchi with the SA Opera company in Cape Town and soon, in January of 2022 she makes her debut internationally covering the role of ”Gilda” in Verdi’s Rigoletto with Opera North in the United Kingdom.

Fellow soprano, Khayakazi Madlala who hails from Matatiele in the Eastern Cape has performed for Gauteng Opera and at the Durban Playhouse. Internationally she has performed at the Mälmo Opera House in Sweden. She received critical acclaim for her portrayal of ”Mimi” in Puccini’s La Bohème and performed with the Johannesburg Opera celebrating Women’s Month. For the last two years she has studied at North-West University in Potchefstroom, under the tutelage of Prof. Conroy Cupido. In 2020 she won 3rd place in The Voices of South Africa Opera Singing Competition and received cash prizes from Old Mutual, Opera for Peace, a prize from Steven Swales Artist Management and an engagement with the National Choir Festival in South Africa.

Accompanist, Jana Mathee studied piano with Truida van der Walt at the North-West University from 2000-2005. During her pre-graduate studies she received master classes from various internationally acclaimed pianists including Frank Heneghan (Ireland) and Vladimir Mogelevsky (Russia). Jana mainly focuses on chamber music and vocal accompaniment. She has a keen interest in vocal music, especially the art song, and started singing lessons with Werner Nel in 2012. During the same year she performed as soloist with the Austrian Baroque orchestra L’Orfeo during their South-African tour.

In 2017 Jana received an IRECO-award for Creative Outputs from the North-West University for a performance with her husband and duo-partner, Dolf Mathee. In the same year she also received a Vice-Chancellor’s-award for the same concert. The following year Jana obtained a master’s degree with distinction in Piano Performance at the North-West University with Albie van Schalkwyk as mentor.

Jana has been appointed as accompanist at the School of Music and Conservatory, North-West University, since 2014. She’s currently enrolled for a doctoral degree in piano performance at the NWU with Albie van Schalkwyk as mentor.

Please support local talent by welcoming the return of summer with the Delicious Diva’s in concert at Affies on 7 November. The 1920 restaurant is open for pre-concert and post-concert snacks or a light luncheon underneath the beautiful trees on the school grounds!

In line with COVID-19 regulations, seating is limited. To avoid disappointment, book online now at www.ticketpros.co.za. All COVID-19 health and safety protocols are strictly adhered to. Masks covering nose and mouth must be worn at all times.